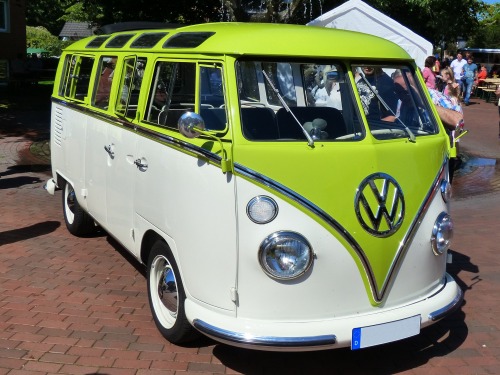 Car Colors in Germany – All Used to Be Possible

Did it ever occur to you that car colors here in California are quite boring? A recent look at a major shopping mall’s parking lot seems to proof my point…

It almost looks like a car dealership; all white cars on one side and black/dark colors lined up on the other. Pretty subdued, no?

In my childhood, car colors must have gone wild in Germany… At least, I remember our cars having all kinds of vivid colors then. In fact, over the years I would say that we had cars of a pretty broad variety of colors. From a bright red to an ochre “Special Jeans Edition” Volkswagen Beetle to a green VW Bug, all the way to a dark violet Mercedes that belonged to my uncle, and my Dad’s lightly linden green 1980’s Mercedes that got replaced by a (boring) silver Benz, to a strikingly yellow Ford and bright metallic blue Peugeot. A kind of gold/beige BMW was in our collection as well… indicating the doom of car colors ahead of us, I assume.

Coming out to California as a teenager, two particular facts regarding cars stood out for me. One was, these monstrous things on wheels roaming California freeways, called Monster Trucks. Second was the fact that the Mercedes Benz here in California had a golden-colored Mercedes star instead of the distinct silver one I was used to from Germany.

That golden Mercedes star together with a golden grill just didn’t cut it for me. It clashed with my image of Mercedes’ sleek elegance conveying a touch of understatement. Everything seemed to be so “bling” in California…

My last car in Germany before moving to California used to be a deep electric blue, but after coming out here I settled for a black one… yes, a boring, black colored SUV! Okay, I admit, not every color goes well with every car model. And the Ford Explorer I had then might not have looked as sharp in electric blue… Besides, at that time, I didn’t want to embarrass my son at his school by standing out with a color that would announce to everyone in the drop-off line that “the Germans” have arrived. We tried to fit in.

But honestly, if you look around you, the cars here in CA make up for a pretty boring car-landscape; from black to white to daring gold or beige/brown, and for the more adventurous type perhaps a dark blue! If you encounter a red, then I am sure it’s some unobtrusive wine/maroon red.

Okay, some Hippie Volkswagen Bus in happy, sunny colors might brighten up the freeway in front of us sometimes, while Ferrari & Co. of course stick out on the streets and call our attention; not only because of their design, but also because they seem to be the only cars these days that dare to put on some bold colors. That’s why, when we see one of them, we have to make sure not to stop breathing since the color alone is taking our breath away!

To my dismay however I found out that the Germans and in fact the Europeans as a whole, are now following the, supposedly fading, American trend towards boring auto colors.

According to AutoBild, the absolute favorite car color of the Germans in 2016 continued to be silver/grey, followed by black and white, and red fell to a sad fifth place. For comparison, in 1986 the color white had not even made it to 2%. Imagine that!

Americans, on the other hand, are on their way to discover (some) color again. While white, black and grey still dominate the top spots, “Blue…” according to the Chicago Tribune, “…is expected to be the hottest car color for 2017!”

I couldn’t confirm this striking trend yet. But, I’ll be for sure keeping an eye out for this splash of color on the streets…!

Discover the world with ADOLESCO.ORG

Plan for the Summer. It's Camp Time! It's only January, but guess what? It's never too early to … END_OF_DOCUMENT_TOKEN_TO_BE_REPLACED

Are you unsure if you can travel to Germany this summer? What about your … END_OF_DOCUMENT_TOKEN_TO_BE_REPLACED